Today, mobile app quality matters the most as the market is very competitive. We need to focus on user experience as well as the performance of the app. If the app contains bugs, the app ratings will go down, and so will the number of app downloads. If we can make our app bug free, the chances of app gaining popularity will increase. This can be achieved by performing different types of mobile app testing.

Before we start talking about different types of mobile testing, let's recall what testing is.

Testing is the process of verifying that a product meets its stated requirements and actual functionality by observing how it works in artificially created situations and using a limited set of tests selected in a certain way.

In simple terms, this is a process of examining and testing an application with two main goals:

Testing is an integral and essential part of app development. In a broad sense, testing is one of the quality control techniques that include:

It is important to understand that testing includes testing itself and other actions related to the quality assurance process:

Related: How to Write a Bug Report That Will Make Your Engineers Love You [+Bug Report Template]

All types of mobile app testing, depending on the pursued goals are divided into the following groups:

Next, we will describe each type of testing in detail, its purpose, and use when testing mobile apps.

Functional tests are based on functions and features, as well as interaction with other systems, and can be conducted at all levels of testing:

Functional types of testing consider the external behavior of the system. The following are some of the most common types of functional tests:

Functional testing is a type of testing aimed at checking whether the app’s functional requirements meet its actual characteristics.

The main task of functional testing is to confirm that the product under development has all the functionality required by the customer.

Like any other testing type, functional testing has its advantages and disadvantages:

It is a testing strategy used to verify the security of the system and ensure an all-encompassing approach when it comes to protecting the application, preventing hacker attacks, viruses, and unauthorized access to confidential data.

The overall security strategy is based on three main principles:

Interoperability testing is functional testing that tests an application's ability to interact with one or more components or systems and includes compatibility testing and integration testing.

With the development of network technologies and the Internet, the interaction of different systems, services, and applications has acquired significant relevance, since any related problems can lead to a decline in the company's popularity, which will entail financial losses. Therefore, the test of interaction should be approached with the utmost seriousness.

Nonfunctional testing describes the tests required to determine an application's characteristics that can be evaluated in different ways. In general, this is testing how the app works.

The main types of nonfunctional tests are listed below:

Let's talk in more detail about types of nonfunctional testing:

Load testing or performance testing is automated testing that simulates a certain number of business users on a shared resource.

The task of performance testing is to determine the scalability of the application for varying levels of load. Here is what occurs:

Related: An Introduction To Server Testing

Stress testing allows you to check whether the application and the whole system are working under stress and assess the system's ability to regenerate, i.e., to return to normal after the stress has ended.

The task of stability (reliability) testing is to check the application's performance during extended usage with an average load level. Operation execution times may play a secondary role in this type of testing. Preference is given to the absence of memory leaks, server restarts under load, and other elements that affect the stability of the operation.

The goal of volume testing is to get a performance score when increasing the amount of data in the application database. Here is what occurs:

Usability testing is a method of defining the degree of usability, trainability, comprehensibility, and attractiveness for users of the developing product under given conditions.

Sometimes we encounter incomprehensible, illogical applications, many of whose functions and uses are not obvious. In such cases, the user would rarely turn to the app again, and would sooner look for more useful analogs.

For the app to be popular, it is not enough for it to be functional – it must also be convenient. If you think about it, intuitive applications save users stress and the employer–training costs. That means they are more competitive! Therefore, usability testing, which will be discussed later, is an integral part of testing any mass-market products.

This type of testing analyzes the product’s ability to withstand and successfully recover from possible failures caused by application errors, hardware failures, or communication issues (for example, network failure).

The purpose of this type of testing is to check the recovery systems (or the ability to duplicate the main functionality of the systems), which, in the event of failures, will ensure the safety and integrity of the data of the tested product.

Failure and recovery testing are significant for systems that work according to the '24x7' principle. Suppose you are creating a product that will work on the Internet. In this case, you simply can't do without this type of testing, because every minute of downtime or loss of data in the event of hardware failure can cost you money, loss of customers and reputation in the market.

For clarity, let's look at some variations of such testing and general methods of their implementation. The object of testing in most cases is very likely operational problems, such as:

Before starting configuration testing, we recommend that you:

After making the necessary changes, such as fixing a bug/defect, the app should be re-tested to confirm that the problem has actually been resolved.

The following types of testing must be performed after installing the application to confirm that the application is working properly or that a defect has been corrected accurately:

The concept of smoke testing came from the engineering environment:

"When commissioning new equipment ("hardware"), it was considered that the test was successful if the installation did not cause the equipment to release smoke." 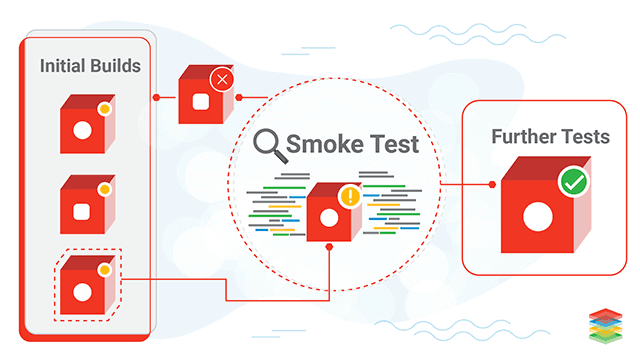 Smoke testing is considered a short cycle of tests performed to confirm that after building the code (new or fixed), the installed application starts successfully and completes its primary functions.

Regression testing aims to verify changes made to an application or environment (fixing a defect, merging code, migrating to another operating system, database, web server, or application server) to confirm that the previously existing functionality is working as before.

Regression tests can be either functional or nonfunctional.

This type of testing is aimed at determining whether the released version of the app meets the quality criteria in order to start testing.

In its purposes, it is an analog of smoke testing aimed at accepting the new version for further testing or operation. It can go deeper, depending on the quality requirements of the released version.

The process of build verification testing

Sanity testing is narrowly focused testing sufficient to prove that a particular function is working according to the requirements specification. It is a subset of regression testing.

It is used to determine the state of a specific part of the application after changes made to it or the environment change, and it is usually performed manually.

The key differences between smoke and sanity testing

As you’ve learned in this article, there are many things to keep in mind when using various mobile testing types.

Consequently, it’s easy to forget something or not to pay enough attention to specific areas. For this reason, we strongly recommend that you plan your mobile app testing process thoroughly.

In addition to the right mindset, the right tools, and strategу, you also need the right team for testing! If you’re ready to use our testing services to make your app a success, contact us today to discuss your project.

What is usability testing of mobile applications?

Usability testing is a method of defining the degree of usability, trainability, comprehensibility, and attractiveness for users of the developing mobile application under given conditions.

What are the processes involved in mobile application testing?

What are the key challenges in mobile application testing?

Key challenges that you face during the mobile application testing process are:

Get the latest guides and expert tips about app development