App prototyping is an important step in preventing a mobile application from failing. By prototyping, you get a complete picture of your future app, test how customers use and react to the product concept, and receive valuable feedback before you spend time and money creating the actual product.

In this article, we’ll discuss how to prototype your app idea and which tools you can use to make a prototype as a non-designer or non-developer.

What Is a Mobile App Prototype?

App prototyping is an intrinsic part of the software development process. It’s also a form of user research that shows the UI design, the user flow, and the functionality of your future app.

Prototypes are visual representations of the app’s idea, design, and functionality that help communicate the way it will look and feel. Prototyping is done during the pre-development stage and, thus, doesn’t require coding.

However, this implicitly means that prototypes aren’t as well-developed as minimum viable products (MVPs). Instead, prototypes solely include the visual parts of the app without any usable functionality.

Still, prototypes allow teams to gather early feedback on the app’s usability and functionality based on visuals. Then, the development team can use these insights to remove or add new UI elements and features before investing time and effort into development.

When working on app development, designers and product teams use various prototypes depending on the design stage and development timeline. Here are three main types of mobile app prototypes you need to know about:

A hand-sketched or paper prototype is a simple series of hand sketches on paper where each sketch shows a different screen, and the sketches show the app’s flow. After the brainstorming phase, designers can share their first hand-sketched prototypes to provide a general idea about the future app.

After iterating on a paper prototype, your team can build the first digital prototypes.

Low-fidelity prototypes are clickable wireframes that are linked to each other. Their design is black and white, so users focus on the app's functionality rather than the colors and images. Low-fidelity prototypes may be created with simple tools, like PowerPoint or KeyNote, or using advanced prototyping apps, like Justinmind or Proto.io.

High-fidelity (or hi-fi) prototyping is the process of creating high-quality, interactive prototypes using prototyping tools like Figma or Sketch. A high-fidelity prototype looks like a real app, including all visual UI elements and interactions, animations, and transitions to test the app’s usability to the fullest. At this stage, stakeholders can get a real sense of the user experience before shipping your app concept to the development team.

Benefits of Creating a Prototype for Your Mobile App

Prototyping is a quick and cost-efficient way to test and validate app ideas. There are many design and business-related benefits of kicking off your app development process with prototyping, including:

It’s essential to test and validate your idea early so that you don’t build a product that the market doesn’t need. Prototyping tests UI elements and user flows and validates if the product actually meets users' or stakeholders' needs.

Interactive prototypes are a great way to implement usability testing in the early stages of software development. Any type of prototype, from paper to high-fidelity, can be used to run multiple rounds of testing and ensure the right usability focus.

Prototyping allows teams to explore ideas before investing money and time into app development. During the prototyping stage, user testing can help identify possible improvements, and then the team can adjust the app’s requirements to users’ needs.

Prototyping can considerably reduce risks and costs. Building a full-scale mobile app and then discovering that the key functionality doesn't meet the market needs may cost you significantly. 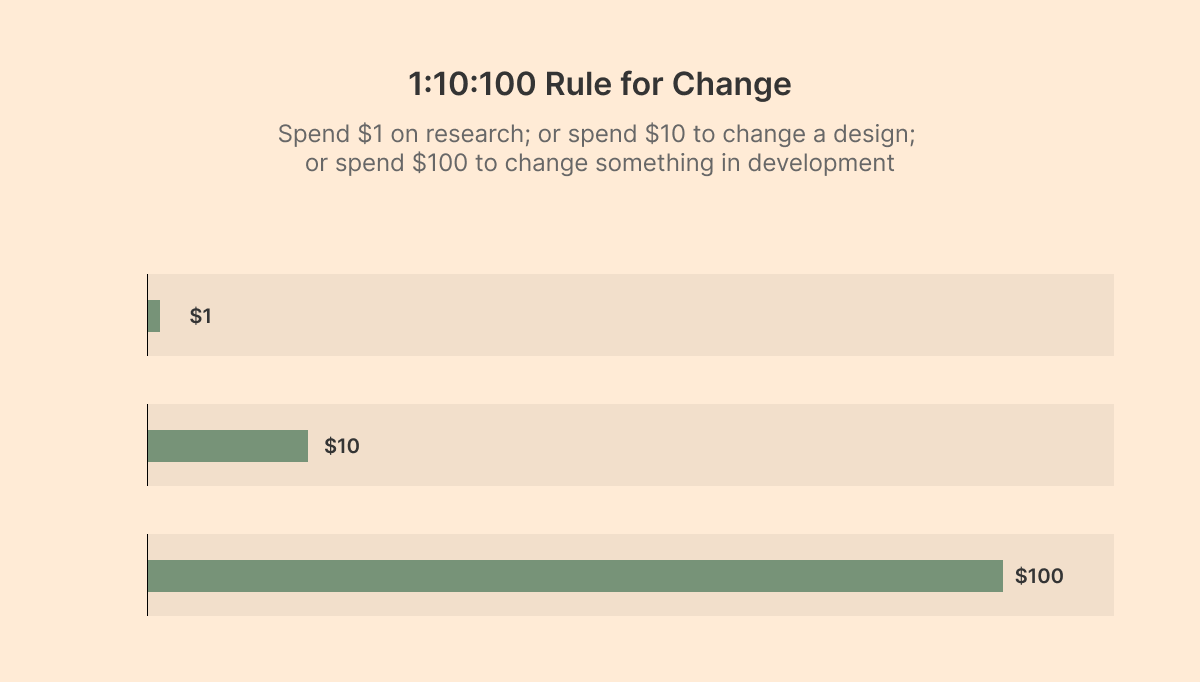 The closer you get to launch, the more expensive changes are. According to the 1-10-100 rule, the changes you need to make with an “almost-finished” product would cost you 100x more than if you do upfront research. Developers and designers would have to completely change the whole product and redo most of their work.

Your app should provide value to your users. Otherwise, it will just “rot” on the shelves of app stores. Brainstorms, interviews, and surveys with your target market can help adjust prototypes and develop a product that the market really needs.

Prototypes can help you catch problems early. Remember, as you share your solution, collect real feedback, test, and learn, your vision grows and becomes more and more defined.

Prototypes also serve as great project roadmaps. Prototyping allows everyone, from project managers and designers to vendors and clients, to share their suggestions and ideas. While brainstorming and discussing any possible alterations, you can also align business and development goals.

Gaining investors’ attention and trust can be tough, but prototypes can smooth your investment journey. Prototypes clearly and visually communicate your app idea to potential investors by providing an interactive experience. Building a prototype requires less money and time when compared to developing an MVP.

Related: Full Guide on How to Build an MVP

A Step-by-Step Guide for App Prototyping

Building prototypes have a lot in common with app development. For instance, they both start with an idea and the features you want to include. Here are the main stages you need to go through while building your app prototype: 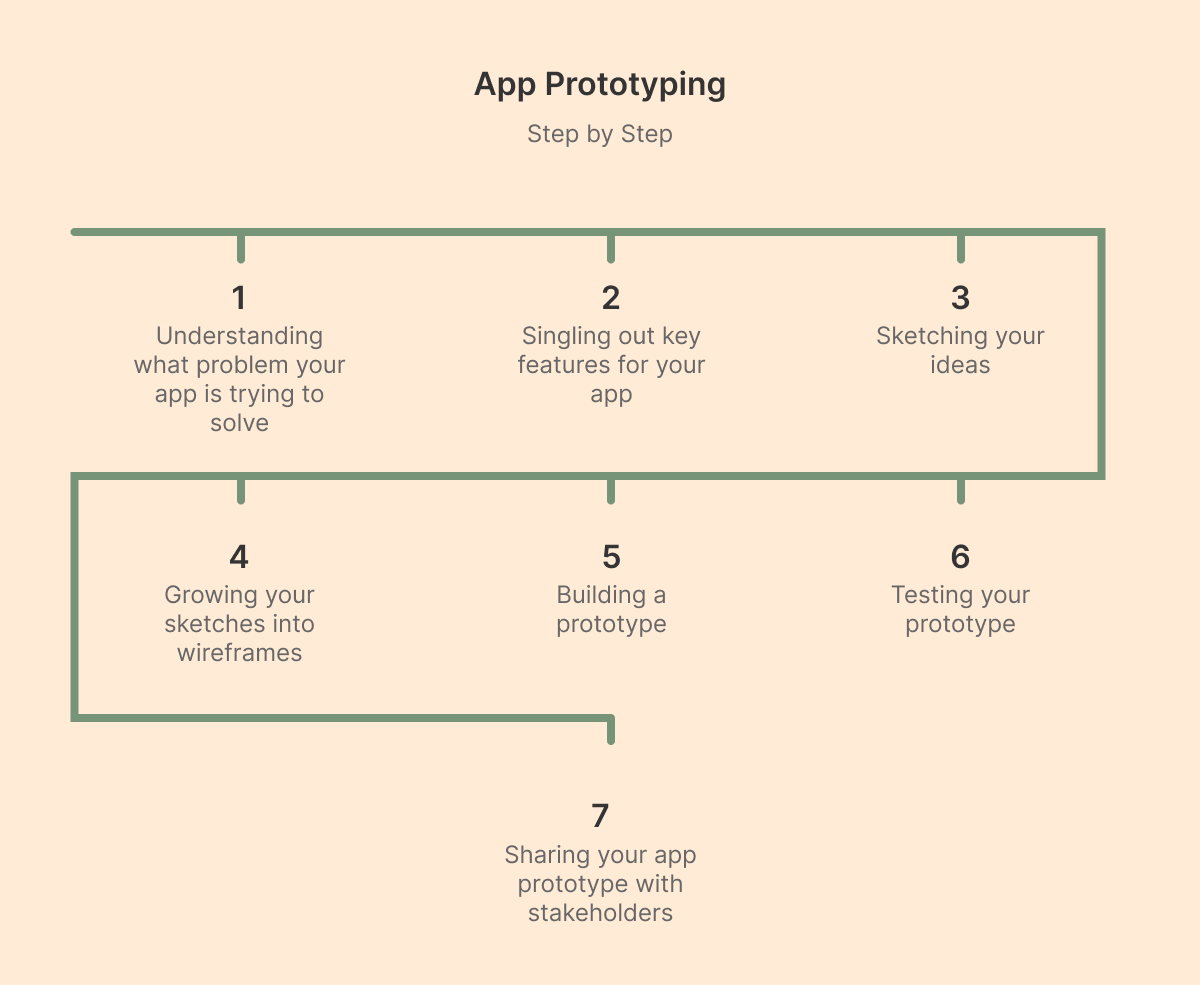 1. Understanding what problem your app is trying to solve

Prototyping is all about finding the right balance between business, development, and user needs. Ultimately, your app should be centered around the user and determined by the needs of the end users.

Before kicking off your development process, it’s better to understand the real purpose of your app by starting with user and market research. While running market research, pay particular attention to competitors, businesses, and user goals to figure out what features users lack. Once you have the full picture of the market and your audience, it’s time to map out your development journey.

2. Singling out key features for your app

As soon as you have identified a key problem to solve with your app, you can start brainstorming killer features. While brainstorming with your team, you need to create a list of the app features that could help your app stand out from the competition.

Then, prioritize those features by their role and importance for your users. For example, if you’re building a hotel booking app, then a booking aggregator and filter could be your key features.

While building your app prototype, don’t focus on all your listed features. Take four or five features and design your app around them. You can add more features once you’ve concept-proofed your app idea.

Once you know your highest priority features, it’s time to think about a flawless user experience. Creating a few app sketches of the primary screens, with the initial layout showing the user interface elements you plan to use, could help you map out and craft the best user experience. At this point, you don’t need to worry about design or advanced prototyping tools.

4. Growing your sketches into wireframes

After paper sketches, you can start creating detailed wireframes for your app. A wireframe is a low-fidelity prototype of your product that consists of words, lines, boxes, and descriptions when needed. Though wireframes cannot visualize your product's final look and feel, they can lay the solid foundation for further app development.

The next step is to turn the wireframe into a working prototype. First, you need to build the app screens based on your wireframe and then add UI elements like buttons and text fields. Once you've finalized the look of your app, add animations and interactions.

Don't spend too much time perfecting the prototype. Remember that your main goal is to create a “good enough” version that you can test rapidly.

Testing your prototype allows you to find all the weak spots and iterate on the design before the launch and deliver a successful product that users will love. Ask as many people as you can to use it to get the most diverse feedback possible. However, the most important group to test the prototype with are the end-users of your app.

There are many ways to collect feedback, from conducting surveys to screen recordings of your app while a tester uses it. Once you’ve gotten valuable feedback, refine your prototype to handle pain points and issues with your app.

Then, test the prototype again and gather more feedback. Repeat this iteration until you have a final prototype.

7. Sharing your app prototype with stakeholders

Now that a finalized prototype is ready, you can show it to stakeholders, namely your clients, investors, or upper management. Because you have plenty of feedback from earlier testing, your app is backed by reliable evidence.

Mobile app prototyping has never been easier than it is today; this is because many software tools allow designers to quickly and easily create prototypes. With that in mind, we’ll provide a short overview of the ten most popular app prototyping tools.

Adobe XD is a vector-based, easy-to-use prototyping tool. Thanks to its drag-and-drop editor, you can easily change the UI elements and customize your prototypes in a few clicks. With Adobe XD, you can create interactive prototypes thanks to its tools for creating transitions, interactions, and other dynamic elements.

Balsamiq has no rivals when it comes to creating low-fidelity wireframes. Everything is drag and drop and designed to reproduce paper sketches. Balsamiq is more about getting early feedback about the app functionality, not UI experience.

Figma is an award-winning, powerful prototyping tool across all platforms. It offers various tools, flexible styles, and many plugins, like Figmotion for creating advanced animations or Autoflow for illustrating user flows. With Figma prototypes, you can run usability tests, iterate in a few clicks, and keep moving your product forward.

With FluidUI, you can create prototypes without a design skillset. The platform features ready-made libraries and helps create wireframes quickly. The prototypes can be easily shared via Live Preview URLs and get instant feedback thanks to chat, comments, and video calls.

With InVision, you can bring your ideas to life in a prototype, present them in Studio files, and brainstorm with Freehand. All the processes are in real-time, thanks to integrations like Zoom, Microsoft Teams, etc.

JustInMind is a free prototyping tool for all platforms. This tool is full of free pre-built widgets and is easy to share and collaborate with other users. With JustInMind, you can create highly interactive prototypes covering app navigation and interactive UI elements.

Proto.io can help turn any idea into a prototype. Thanks to its intuitive drag-and-drop editor, anyone can create, animate, and share prototypes without coding and design skills.

With 1000+ templates with all popular blocks and elements, prototyping doesn’t take too long. Proto.io comes fully loaded with static and animated icons, images, and sound effects.

Marvel rapidly creates wireframes, designs, and prototypes thanks to highly intuitive UI and integrations. The app offers a wide range of features like gestures, dynamic transitions, and interactivity to help provide a near-real user experience in the early development stages.

Sketch is a lightweight design tool with a simple interface. It is an all-in-one platform to create animated timelines, turn wireframes into UI elements, and transform screenshots into mockups. This tool allows for vector editing and provides pixel-perfect precision.

Prototyping used to be an optional part of the app development process. Now, it’s an indispensable ingredient for app success. Prototyping can deliver real-world insights that you cannot discover through planning and assumptions alone.

When paired with continuous testing, prototyping helps deliver the right app that the market really needs. At Orangesoft, we can turn your ideas not only into prototypes but into top-ranked apps. Contact us to discuss the details!

Get the latest guides and expert tips about app development