In 2022, the world’s economic recovery seems to be gaining traction as the pandemic knock-on effects are fading. The mobile app ecosystem, however, was among the few sectors which experienced a swell in demand as we were ordered into lockdowns. During the pandemic, mobile app usage smashed a record with over 200 billion hours spent on apps during April 2020.

The following year was equally bankable for mobile app owners. In 2021, app store consumer spending saw phenomenal growth with an eye-popping total of $170 billion. This number translates into a year-on-year (YoY) growth rate of 18%. It also means that users are disposed to pay for premium experiences and services inside their favorite products, thus flocking to mobile as an ultimate turnkey ecosystem.

According to the State of Mobile 2022 report, this mobile craze has been particularly beneficial for 233 apps and games that each raked in more than $100 million in annual consumer spending, with the luckiest 13 surpassing $1 billion. In 2020, the number of high-ranking apps was 20% lower, while 2019 was the bottommost of the past three years with 168 apps in this highest-earning group. 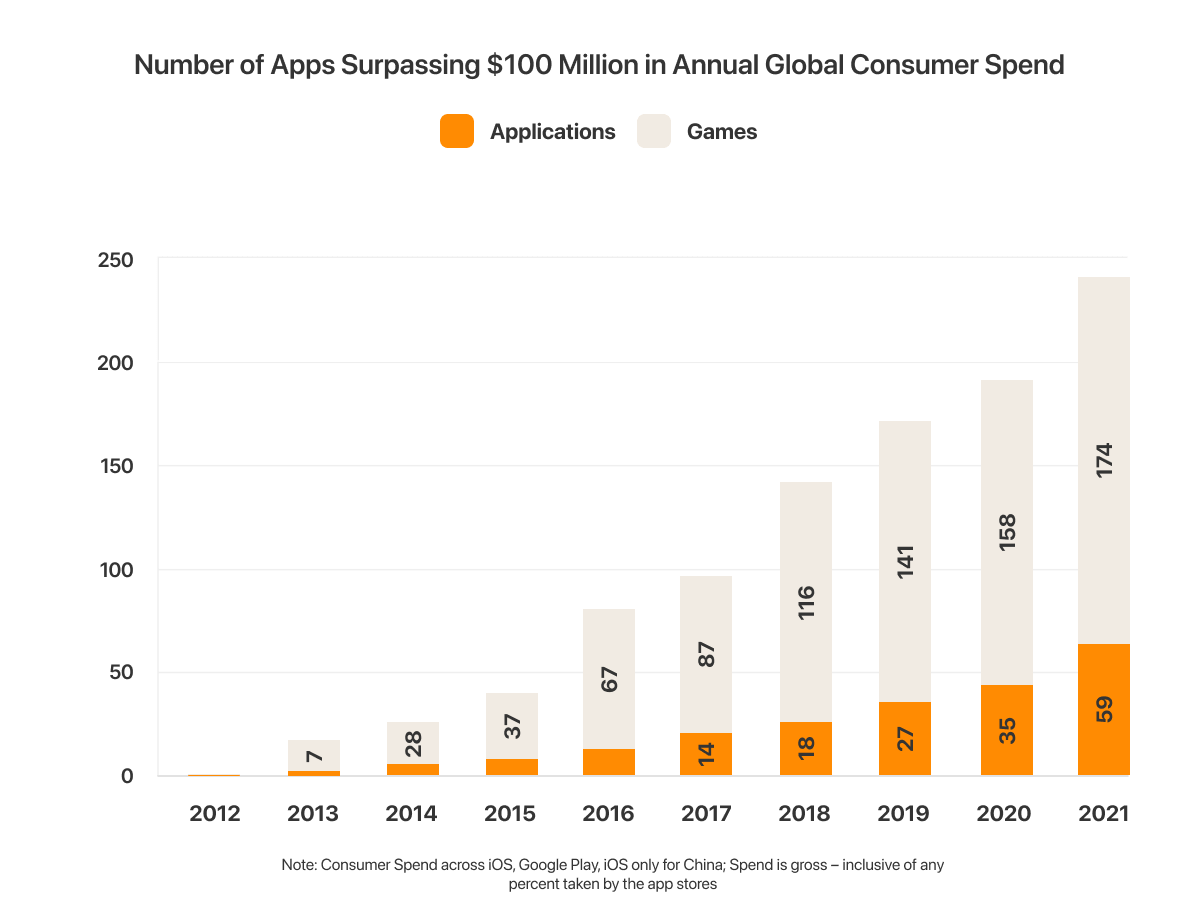 The upward tendency was followed by a bountiful landscape of marketable applications. Mobile apps that made millions include predictable categories that had already topped the ladder in previous years. According to Sensor Tower, games, social apps, and entertainment solutions account for the lion’s share of profits on both Apple’s App Store and Google Play. 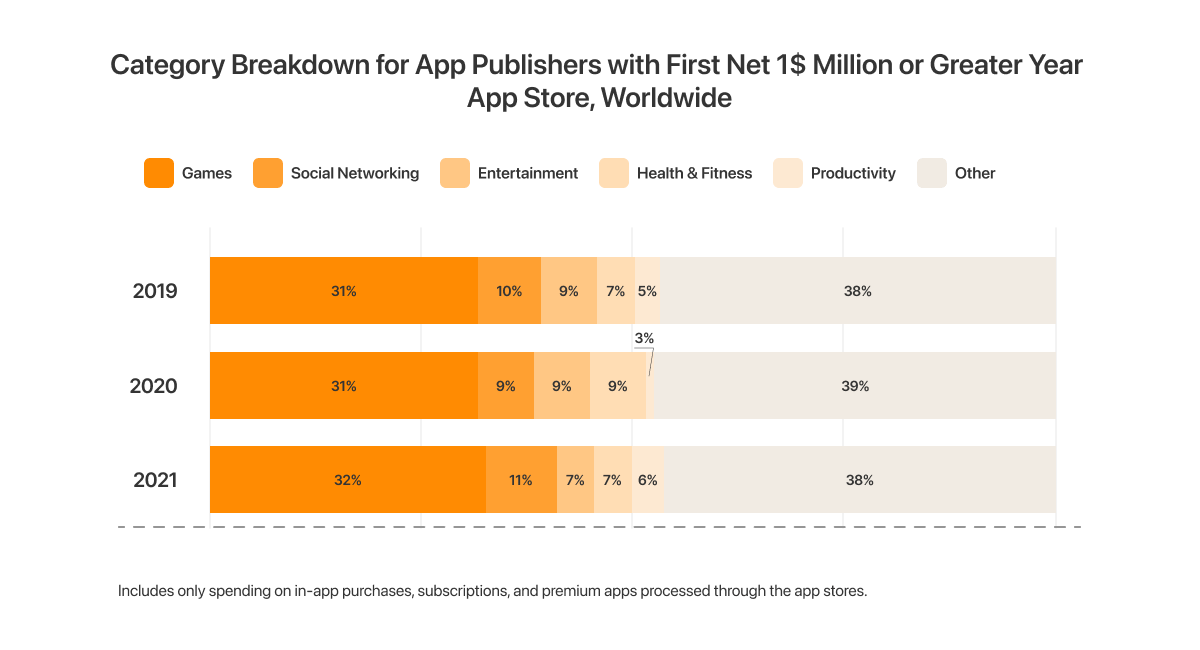 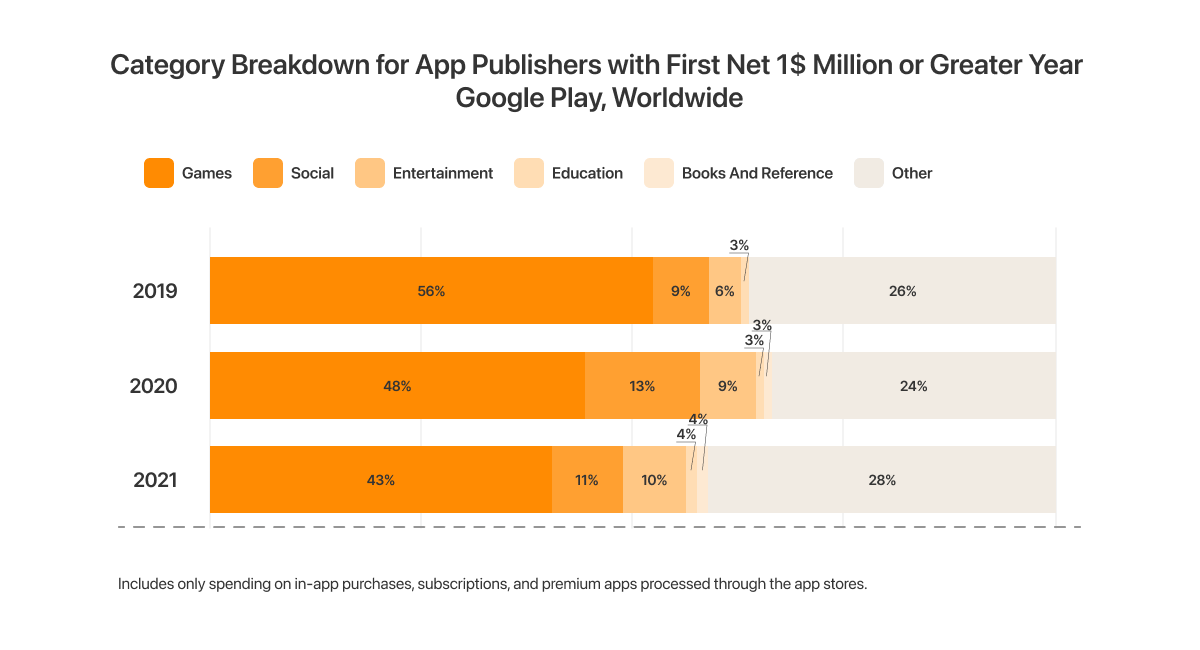 However, the terrain of the highest-grossing apps is much more diverse, going beyond game publishers. Subscription services like Piccoma, backup apps, and other miscellaneous products also made it to the most-profitable app list. As for the monetization approach, in-app purchases and subscriptions account for the majority of mobile app earnings.

Related: How Much Money Can You Earn With an App?

With that said, we will now go over the mobile app categories with the highest earning opportunities so that you’re better aware of mobile app earning potential by category.

5 Most Successful Mobile App Types That Generate Revenue for Businesses

In 2021, Americans spent a third of their waking hours on their smartphones. Now imagine if app publishers could monetize this ton of hours. The following groups of mobile apps have done a great job at making the best of the increasing consumer hour spend.

Games have always won the hearts and minds of app users by offering an exciting retreat from the real world. Over the last few years, the gaming app market has been invigorated with console-like graphics, gameplay experiences, and new titles.

Mobile game consumer spending has been growing steadily since 2018. In 2021, the total annual spending reached the pinnacle of $116 billion. 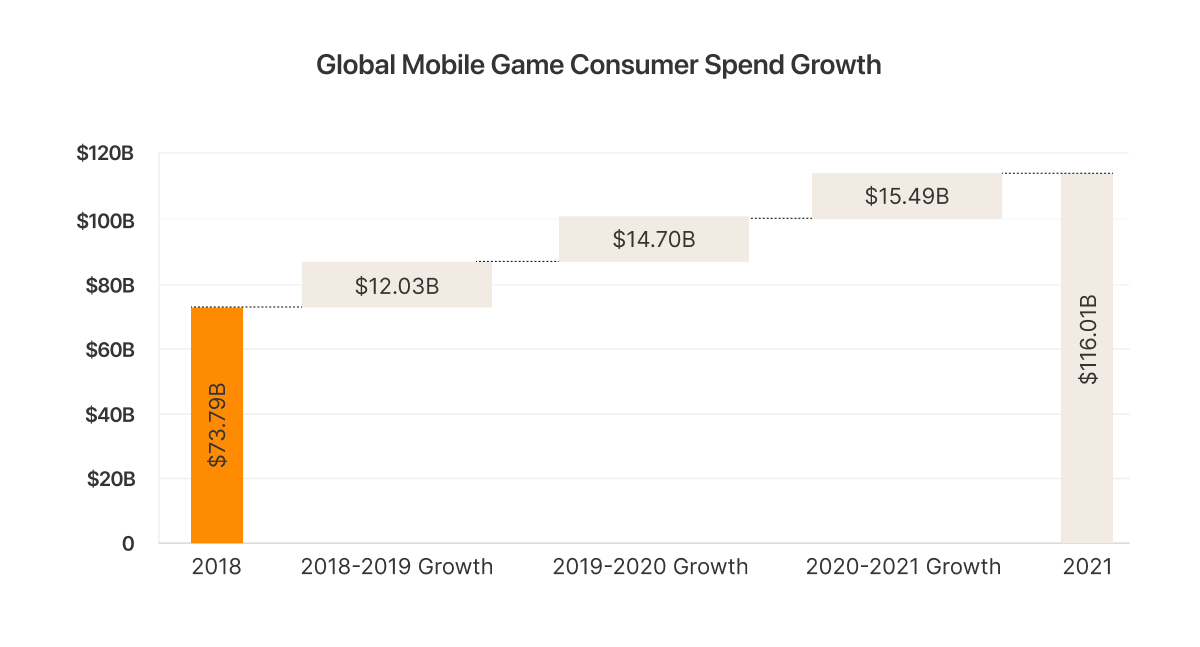 Here’s which game genres brought the big bucks in 2021, according to data.ai:

Let’s zoom in on the most successful apps in the category.

This virtual universe is a gaming platform with a Steam-like experience. Roblox is a gaming destination that allows players to enjoy gaming experiences built by various game developers. Thus, users are granted access to multiple game modes, game types, and game genres. The app leans on the freemium model with in-game currency, ads, licensing agreements, and royalties. In 2021, the game publisher reported $1.3 billion worth of revenue along with 32.6 million daily active users.

The year’s biggest blockbuster, Genshin Impact, is an open-world action RPG that landed in the mainstream. This mobile gacha game is based on a free-to-play mechanism with premium add-ons. The game amassed $1.8 billion of app revenue in 2021 thanks to regular updates that kept players hooked.

Coin Master is a single-player, casual mobile game that allows users to win coins. Those are then used to upgrade items and build up villages. The app’s business model rests on in-app purchases that are omnipresent in the game. Coin Master surpassed $1.3 billion in user spend in 2021.

In 2021, there were over 3.78 billion social media users around the world, equating to over half of the total global population. This number is poised to grow to 4.41 billion by 2025. This avid user base puts social apps in a lucrative position for an estimated $9 billion of app revenue by 2022. Thus, both brands and consumers realize the importance of a sustainable social network that creates a breeding ground for entertainment and new marketing channels.

As for the microtrends, live video streaming and chats are the two types of social media apps that make the most money. Consumer spending in the top 25 livestreaming apps increased to $3.8 billion in 2021, which translates into a YoY increase of 57%. Moreover, streaming platforms managed to accrue massive user growth thanks to exclusive content releases.

The rise of avatar social apps continues to grab users’ attention as metaverse stocks are ready for a bull run. These apps blend creative self-expression, user-generated content, and online communities into a single whole, thus often enabling users to dive into the metaverse spaces.

Three leading avatar apps — Litmatch, REALITY by Wright Flyer, and ZEPETO — have witnessed downloads increasing by 160% YoY. The skyward trend highlights the growing demand for avatar-based applications, even with no metaverse components.

Built as a short-form video-sharing platform, TikTok has transformed into a full-blown video service with content for every user type. TikTok's business model leans on ad revenue and in-app gift purchases (through in-app currency) as a revenue source. TikTok’s annual revenue reached a tipping point of $4.6 billion in 2021. As for monthly active users, that number hit 1 billion in 2021 and is counting.

This leading live streaming platform is a relative newcomer for Android users. Being used for casual communications, Bigo Live taps into the latest technologies, including augmented reality and artificial intelligence, to offer unmatched streaming services. The app generates the majority of its revenue through in-app purchases. It holds great potential for toppling its competitors with over $2.3 billion of revenue in 2021, accounting for a 34.1% increase.

Being a trending communication platform, Discord received a large word-of-mouth growth in 2021. Today, it holds impressive user statistics — 140 million monthly active users. Although Discord leans on an ad-free business model, it capitalizes on its Nitro subscription packages, server boosting, and game fees. As for revenues, no number has been disclosed for 2021. In 2020, Discord reported $130 million of app revenue.

Video-streaming services and content-based platforms also ruled the roost last year. Besides the usual suspects like Netflix and YouTube, users flocked to entertainment apps to listen to podcasts, scroll through memes, and lift their mood during the pandemic.

All told, ten leading entertainment applications scored over 1 billion combined downloads in 2021. This hall of fame includes Netflix, which topped the list with 173 million yearly downloads. 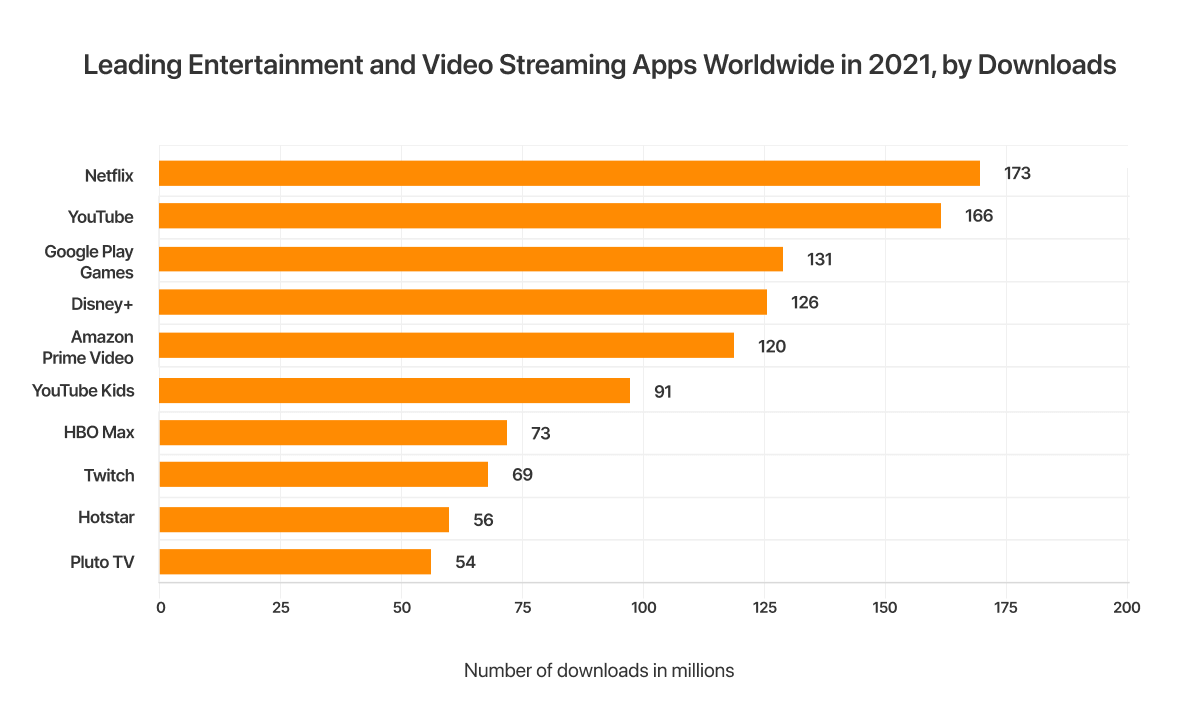 According to the State of Mobile 2022 report, entertainment apps are especially appealing to Gen Z, who have migrated much of their entertainment on mobile.

So, what apps make the most money? It’s a no-brainer.

As famous as the Internet itself, YouTube continues to take the reins of consumer spending worldwide. YouTube generates revenue through advertising and monthly subscriptions such as YouTube Premium. This video-hosting service accrued almost $29 billion in ad revenue in 2021, an eye-popping 47% increase from 2020. Global consumer spending is astonishing as well — $1.2 billion in 2021.

Home to popular entertainment services from Pixar and such, Disney+ is available in 59 countries. The geographical span translates into $2 billion of global consumer spending. Subscriptions, exclusive releases, and global audience place it among the top-grossing entertainment apps.

This Chinese streaming platform also enjoys the limelight of having among the largest profits. In the third quarter of 2021, paid memberships increased 8% year-over-year to 124 million. The upturn was driven by Chinese anime and drama series.

The year 2021 also looked strong for health and fitness applications. Amidst the COVID-19 breakout, consumers remained wary of public wellness opportunities like gyms as well as healthcare facilities. Precaution made consumers turn to mobile, resulting in 600 million downloads in 2021. 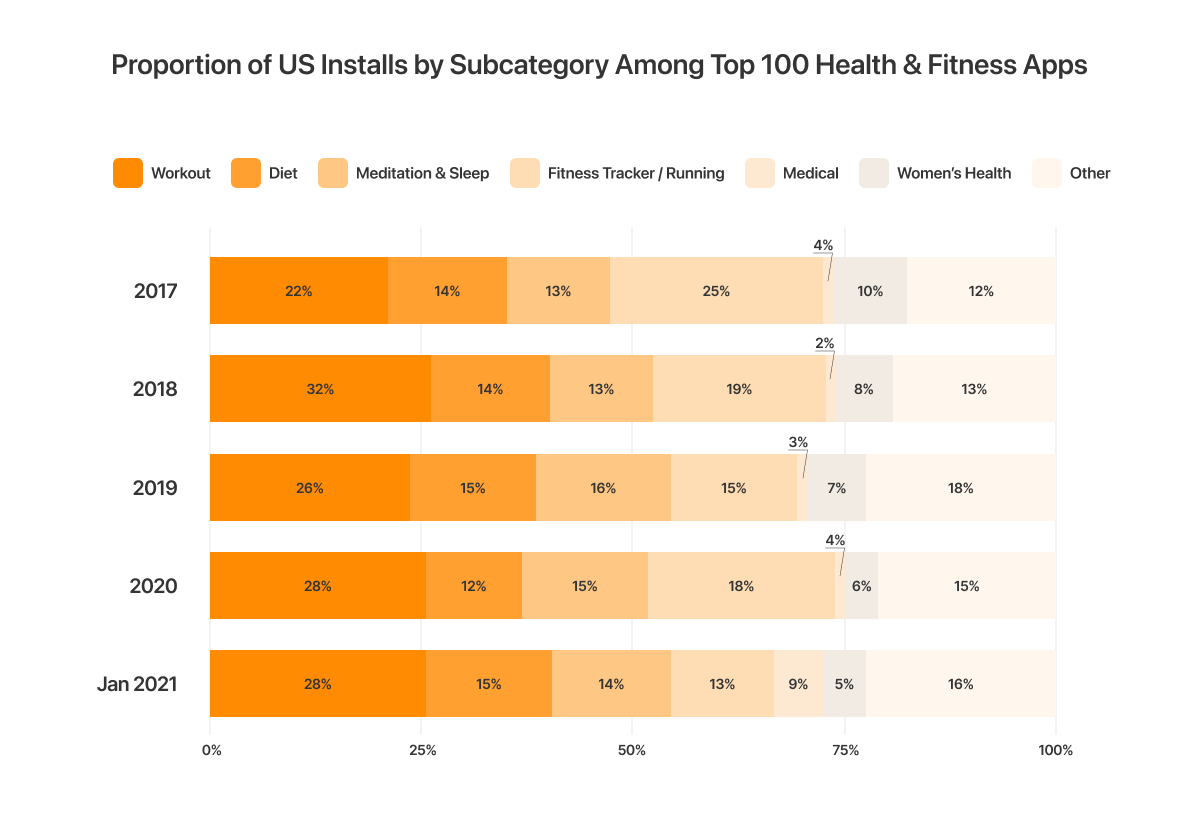 Now, let’s look at app revenue in this category using the top-downloaded apps as examples.

Touted as the #1 app for sleep and meditation, Calm is a high-flying mental-wellness solution. The application helps users cope with anxiety, depression, sleep problems, and other mental health conditions. Just like the majority of meditation apps, Calm’s main revenue source is a monthly fee for premium access to guided meditations, music tracks, and other content. The app saw global consumers spend $119.19 million in 2021 for premium features and functionalities.

This app is a long-time bestseller among diet and food trackers. MyFitnessPal helps users track their calorie intake and build healthy habits and routines. The app sat comfortably on top of other competitors, with the highest in-app revenue of $8.23 million. MyFitnessPal owes this amount to premium memberships and ads.

Creeping up on MyFitnessPal is Strava, which surfaced at #3 by total in-app revenue in 2021. Being a popular fitness-tracking app, Strava accumulated over $5 million in revenues along with attracting 76 million active users. The app is based on the freemium business model combined with paid subscriptions, brand partnerships, and user data monetization.

The virtual dating market significantly extended its reach in 2021 as users were stripped of physical connections and meet-ups. Thus, the mobile dating scene has experienced a boom in global consumer spending, which translated into a 95% growth since 2018, and grossed an all-time high of over $4 billion in 2021.

Despite absent physical hangout places, consumers didn’t turn away from online dating applications. On the contrary, most leading dating apps experienced increased usage two years into the pandemic. The possible reason behind this popularity is top apps like Tinder rolling out new features to extend their functionality, thus transforming from swipes into meaningful connections and virtual spaces. 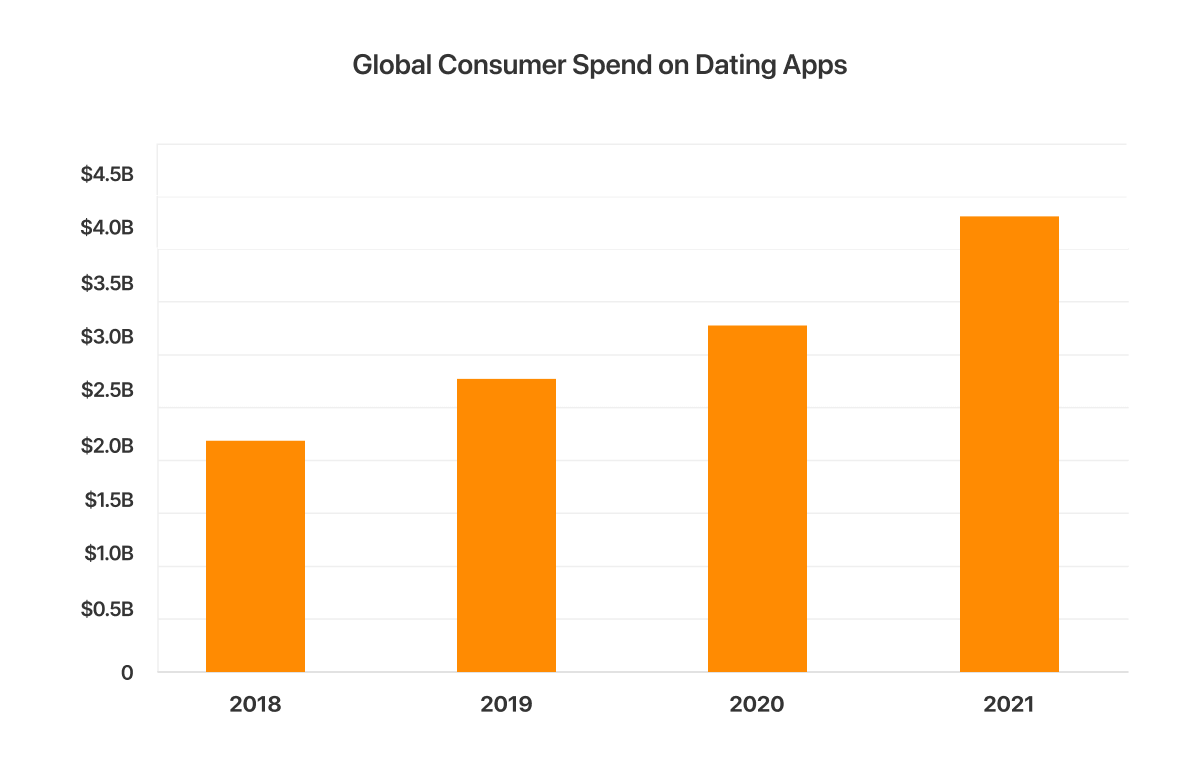 In 2021, Tinder was dominant in consumer spending with a mind-boggling $1.35 billion. The encouraging statistics prove that Tinder’s free-to-use model clicks with its diverse audience, offering extra features such as Boosts and Super Likes, in-app subscriptions, and purchases. Tinder also adjusts its pricing to the user's age, which is innovative for dating applications.

Just like other competitors, Bumble helps users create connections with like-minded individuals. Bumble’s monetization model is akin to Tinder, with premium add-on features called Spotlight and Boost. In 2021, Bumble’s revenue stood at $532.9 million, as opposed to $360.5 million in 2020.

Azar is a video-chat platform that has been compared with the category’s phenomenon Chatroulette, matching users by video from anywhere in the world and instantly translating voice and text. The social platform offers a variety of in-app purchases and subscriptions to grant users more control over their social journey. As of February 2022, Azar has gathered 228 million cumulative downloads and scored more than $610M in total consumer spend since its launch in November 2013 on Google Play and June 2015 on the App Store.

The rationale and statistics prove that the last year was lucrative for the mobile app scene. Gaming and social applications snatched the leading positions, with wellness and dating apps catching up. Video-streaming services also brightened up our quarantine days, thus enjoying increased consumer spending and higher revenues.

However, only a few mobile applications make it to the top of the heap and rake in unbelievable revenues. Even the most popular categories don’t inherently come with a giant user base and a wealth of in-app purchases. Therefore, before building a mobile solution of your own, you need to factor in far more criteria than the trending app types. A successful project requires meticulous planning, analysis, and a winning tech stack to score the optimal product-market fit.

We at Orangesoft offer a full cycle of tailored app development services to take your project from ideation to release. Hit us up, and we’ll rock app markets together.